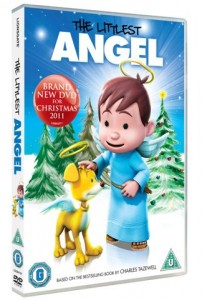 The nights are drawing in, the weather’s turning colder and we are all starting to snuggle up on sofas with our families to watch heartwarming films in the lead up to Christmas. Or at least that’s what seems to happen in my house. We have a rather large collection of said films, which seems to get larger year on year. When I therefore heard about the new film/DVD ‘The Littlest Angel’ I jumped at the chance to review it with my kids.

A brand new film all about a small angel who can’t quite fit with the heavenly program. While all the other trainee angels are growing their wings through endless good deeds, Littlest has a crooked halo and is always late for class. The film follows his trials and tribulations in the lead up to the first Christmas, will he get back to heaven in time for the big event?

My first impression is that this little film has a brilliant ability to captivate my children, I didn’t hear a peep throughout the whole movie. It’s a very sweet little tale that any parent could approve of and it fits wonderfully with the impending festive season.

My next impression was that the animation was quite different to the usual style of computer animated films. It’s more rounded and slightly less detailed (intentionally). My husband thought it looked a bit like computer animated modelling clay. Overall it actually added to the ‘cuteness’ as everything in the film was big, round, cuddly and bright.

I also found my attention wavering in places. I think this is primarily due to the film’s pacing, it’s not hugely fast paced especially at the beginning. In fact I’d say it had more of a television speed, rather than a movie. If I had been the editor I would have split it in to two or three episodes but that’s just personal preference on my part. My children certainly stayed engaged the entire time.

Would I recommend this?

As a sweet little family friendly film I think this movie hits the mark. I didn’t personally find it overly engaging, but I think this film (unlike some bigger name animations of recent years) is one made for the kids. If you are looking for a cute little festive film that your children will enjoy, then this little DVD fits the bill very well.

I’d like it to have been split up into two or three episodes as I mentioned before but that’s just my own personal opinion. A cute little box set with a cuddly ‘Littlest’ might have been cute too as this would make a lovely present.

The Littlest Angel is out on DVD (RRP £12.99) and Download to Own and Rent 10th October 2011 courtesy of Lions Gate Home Entertainment.