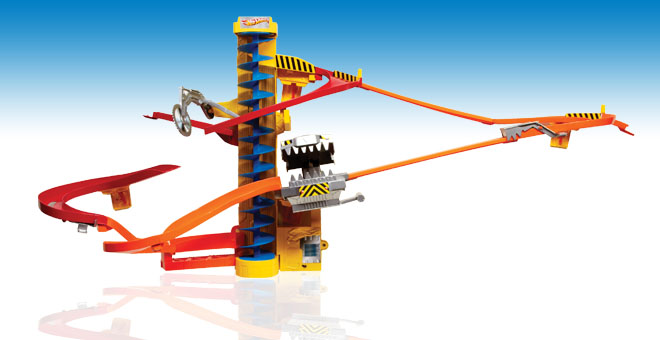 My boys have been fans of the Hot Wheels Wall Track range for quite sometime now, so when we were offered the opportunity of reviewing the latest addition we were more than happy to agree. The new track is called the Power Tower and promises new thrills to add to an existing wall track or if you’re just starting your collection. 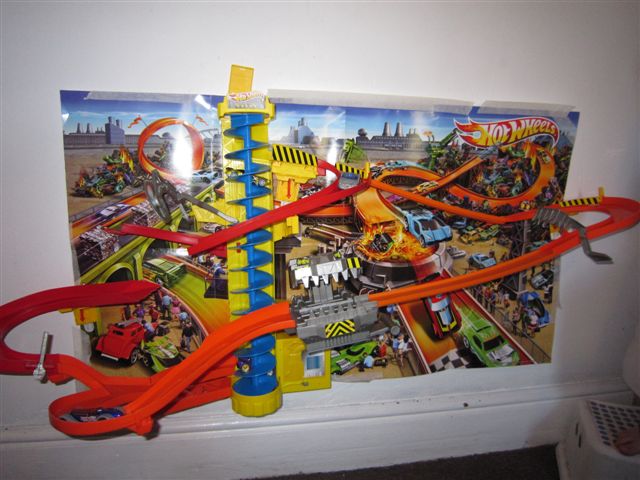 Previously we had found the wall track easy to assemble and this time was no different. The only issue we had was trying to keep the boys away as my husband stuck the pieces to the wall! The Power Tower does require batteries which we didn’t have in the house (worth noting if you’re thinking of this as a Christmas gift) so a quick trip to the shops and we were good to go. 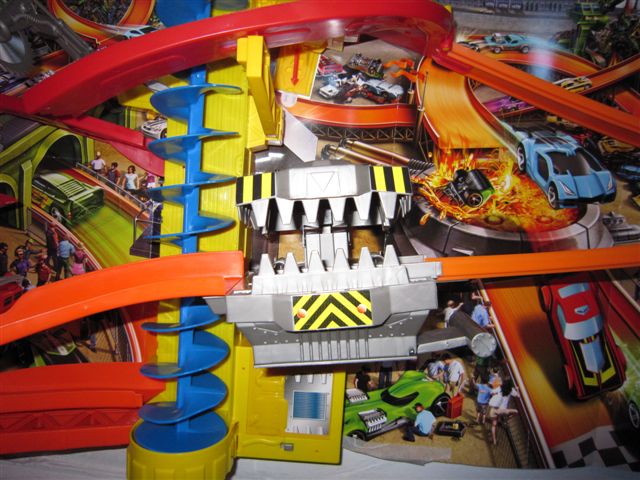 To say the boys (and my daughter too) love this track would be an understatement, it can keep them occupied (and blissfully quiet) for a long time. Cars whirl around in the lift(elevator) style toy before zooming down the track, hoping not to get caught in the chomping head further down. 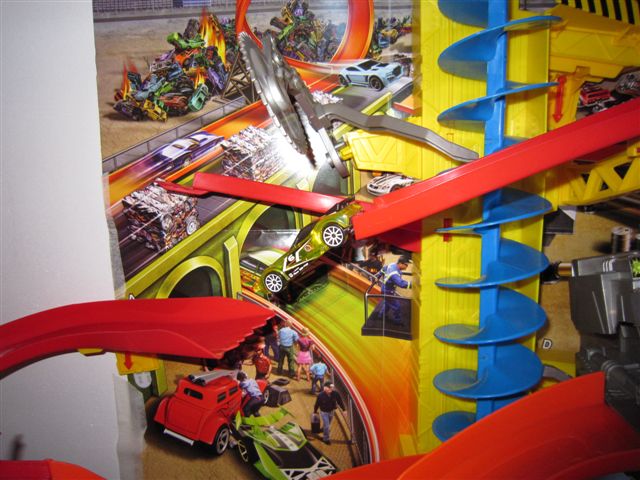 Definitely, it’s as much as the previous versions of wall track and can of course be connected up to other packs, making it a versatile and fun filled toy.

I always prefer toys that come with batteries included in case I don’t have any in stock. I’m also not a huge fan of the background posters if you are planning on connecting up several tracks.

Available at all good toy retails online and instore. 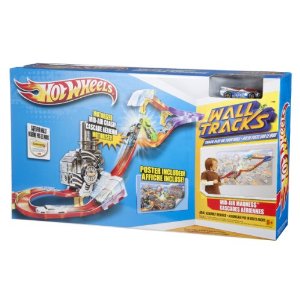 Back in October I reviewed the wonderful Hot Wheels Wall Track toy. My children abdolutely loved it so I was thrilled when asked to review the brand new Mid-Air Madness track!

Just like last time we found the track very easy to assemble and attach to the wall. It’s also a little more compact in width making it perfect for smaller bedrooms. The instuctions also doubled as a background poster which definitely enhanced the fun as far as my kids were concerned. 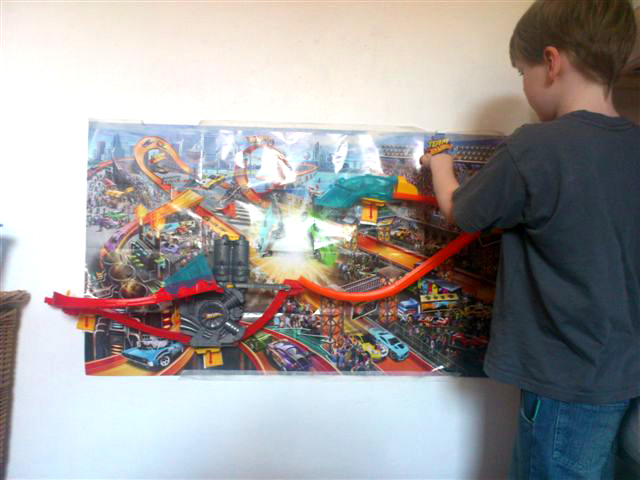 Having kept the kids at bay during construction we let them loose on their new toy. They absolutely adored it! Cars wizz around the track at speed, flying through the air before landing with ease and carrying on their whirlwind journey round and round.

The track did require large D batteries which unfortunately were not included, this caused a slight delay while we popped to the shops. We also found that they drained the batteries rather quickly, so make sure you have plenty on standby if you don’t want unhappy faces all around. 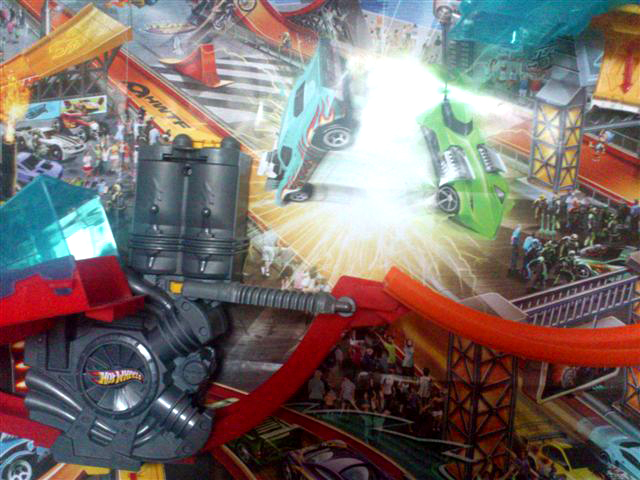 On day two of the wall track one piece did keep disconnecting from the wall due to the sheer force as the cars landed. This was rather annoying to me but the kids seemed unfazed and just kept reconnecting it and carrying on.

Another day on and a piece fell off the wall, I rather think this was down to us perhaps not attaching the wall strips firmly enough. Unfortunately two patches of wall paint disappeared along with the track pieces, this did not happen with our first Wall Track set, so I am unsure if it was my walls that caused the problem or the track.

Once we had reattached the track it stayed put, with no further falls or disconnections. The best advice would be, make sure it’s really well stuck the first time!

Considering how happy all my children are (not just the boys) I would definitely recommend it.It seems to provide hours of fascination and fun.

I would like to see the batteries last a little longer. It’s also a fairly audible toy, akin to a typical fan noise so don’t attach it in the TV room.

If you are lucky enough to be the Mother or GrandMother of boys then chances are you’ve heard of Hot Wheels cars. Frequent adverts show amazing tracks where cars swerve and dive with ease. Now Mattel have taken Hot Wheels one stage further with the introduction of wall tracks. I think it’s safe to say that these are going to grace many a Christmas list, but do they deserve too? 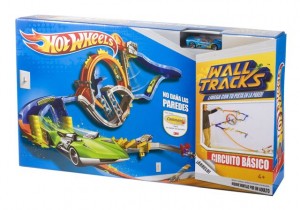 I received the Hot Wheels Starter Set and Daredevil Curve Set to review. With my husband on hand we set about assembling the array of components. First we taped a large design template onto the wall, this has notches either side which guide you to the placement of your wall brackets. These are attached using 3M Command Strips which are removable (although not reusable) and do not damage your plaster work. 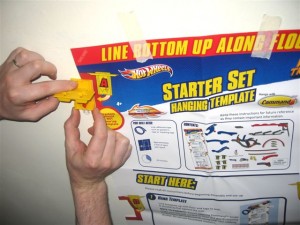 As we had two sets we headed to the Hot Wheels website for advice on joining them together.  They have a selection of useful videos which take you through assembly step by step. Within 15 minutes the track was on the wall! 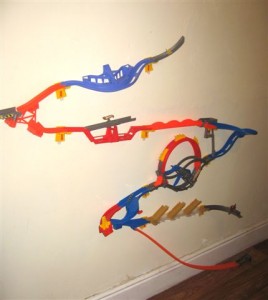 Our three children were eagerly waiting in the wings, ready to play. I must admit that I half expected it to fall off the wall as soon as they started, but thankfully it stayed put. There was a lot of squealing, giggling, jumping up and down and general enthusiasm. The only problem we encountered was the cars shooting off at speed and having to be retrieved from under cupboards. 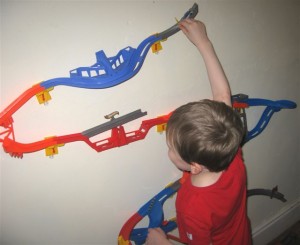 It’s hard to explain the sheer joy this toy has brought my children, my daughter included. There’s little ramps which they can control to change the direction the cars take. Pretty soon the cars had been named and they were inventing little make believe stories using them. The day after assembly I came downstairs to find my two eldest had crept out of bed and were playing quietly in their pyjamas. It seems to have completely captured their imagination and provides hours of happy contented play. The only problem it seems, is getting them to stop playing with it occasionally. 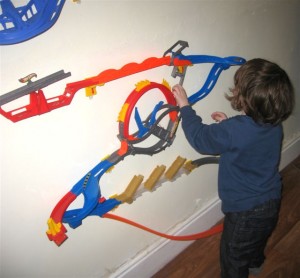 I had several reservations about this toy, first I wondered if it would break quickly due to it’s plastic construction. Second I wondered if I had a bare expanse of wall large enough to accommodate it. Thankfully all of these lingering concerns have been answered. The plastic has survived some very vigorous playing and has slight flexibility which makes it very durable. As for wall space, the track can be adapted to make it work for pretty much any wall (as long as it’s not wallpapered). 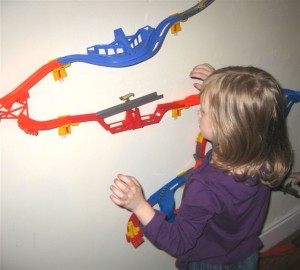 I honestly think this could be one of the ‘must have’ toys for Christmas 2011 so buying early might be a good idea!

It’s also great to have an engaging toy that doesn’t involve sittng in front of the TV or computer.

I’d like to see even more track configurations either in the packs or on the web, this may come in time of course.