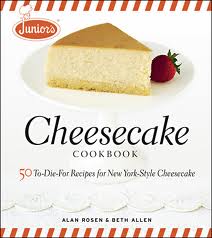 I love cheesecakes, always have, always will. There’s endless combinations of flavours and they are often easy and quick to whip up. So I was very excited when I received a copy of Junior’s Cheesecake Cookbook to review from GMC Publications

The book features 50 cheesecake recipes that are served in Junior’s restaurant in New York. Now I’ve never been to New York so I should probably start by saying that I can’t comment on how close these recipes are in taste to their commercially available cousins. So the only option left was to try out a recipe.

It was my birthday recently so I rather enthusiastically set my husband to work on a White Chocolate & Raspberry Cheesecake. He’s no stranger to a cheesecake and has baked many a delicious and quickly devoured pudding. But he failed when it came to Junior’s. The recipe was followed to the letter and much time and effort put into the making, but still the cheesecake sank in the centre and was dreadfully cracked on top. But I should mention that these cheesecakes are somewhat different from normal, having a sponge base apart from anything else. So we initially put the failure down to inexperience with this book and moved on.

A few days later we set about the second attempt, we studied the pages giving you tips on what to do if your cheesecake goes wrong. We read and read again but while the base was more successful, once again the cheesecake did not behave as expected.

I will point out though, that while both cheesecakes mig 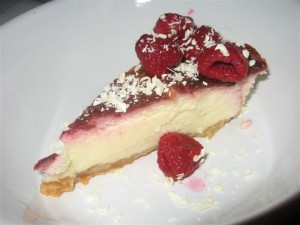 ht not have been the prettiest, once cooled they did taste very nice. So nice in fact that we have not been completely deterred from trying another recipe from this book in the hope that we will conquer these cheesecakes in the end.

Here is a slice of our most successful attempt so far.

Would I recommend this book?

Hmm… that’s a tough one. I really want to love this book. The flavour combinations are heavenly and I’m sure many people have been successful. But when you start with 3 pages of what to do when it goes wrong it doesn’t inspire me with confidence. So instead I’ll say if you’re a perfectionist then I wouldn’t recommend this book unless your prepared to make several attempts. But if flavour is more important than presentation, then yes you’d probably enjoy having a try at these delicious recipes.

In my opinion yes. Several of the recipes have no pictures to accompany them which is disappointing, it’s helpful to know what the end result ‘should’ look like. I’m also not terribly keen on the layout, having to flip back and forwards for the bases and then tops, but it’s not a huge annoyance. The cheesecakes are also rather large, so perhaps a table to reduce quantities for anyone wishing to test out with a smaller cake would be nice. Other than that it is a very nicely presented and attractive book.