Gosh we’ve been naughty here recently and haven’t been concentrating enough energy on the blog. To make amends here is a little insight into how our house pendants are made.

I love living in Derbyshire, its such a beautiful county with a variety of countryside and a wealth of history. Its also right in the middle of the country, so it feels as though its halfway to anywhere else.

The county can claim to have the first National Park in Britain .There are bustling market towns such as Ashbourne and Bakewell, and also Buxton the beautiful Georgian Spa town which boasts the highest market place in the country. There are many picturesque villages like Ashford in the Water, Tissington and Eyam, the famous ‘plague village’, which went into voluntary quarantine when the plague was imported from London in 1665. 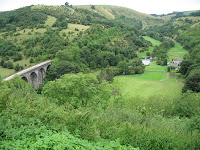 In December 2001, the Derwent Valley Mills in Derbyshire became inscribed as a World Heritage Site. Stretching 15 miles down the river valley from Matlock Bath to Derby, the World Heritage Site contains a fascinating series of historic mill complexes, including some of the world’s first ‘modern’ factories.

One of my favourite places is the fascinating small town of Wirksworth. It has many narrow streets and a maze of interesting alleyways. It has a wealth if interesting old buildings and many lovely views. The parish church in the centre of the town is situated in a cathedral-like close.

My Heritage Collection of jewellery is inspired by my love of historic buildings, many pieces based on Derbyshire cottages. I start by taking photographs and then create a line drawing.

The drawing is simplified and reduced and then I lay layers of wax over the top of the drawing. The wax is cut to the shape of the building and then further layers of wax are used to build up the details. Once it is completed the wax is melted away and sterling silver poured into the space left behind.

The silver house is then filed and polished until it looks good enough to wear. The pictures below show a selection of Wirksworth houses. 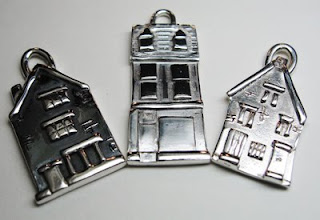 The house in the middle and the one on the left has already been sold.