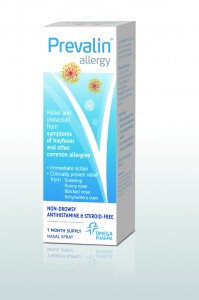 I love the summer, gardens are in bloom, BBQs are lit and we all spend a lot of time outdoors. But there is one huge downside, Hayfever! I’ve suffered from hayfever all my life. As a baby it caused my parents many sleepless nights as I struggled to breathe through a blocked nose. The Dr prescribed medication as I got older, but I either forgot to take it or it seemed to only offer mild relief.

As an adult this problem has persisted. When pregnant with my children I had to suffer the full blown effects, as so many of the medications available where unsuitable during pregnancy and breastfeeding. Hayfever can make you feel incredibly miserable as you suffer a runny/blocked nose, crazy itchy eyes and sneezing that never seems to end. But luckily you do not have to suffer inside your house, or only venture into nature with a mask.

I was asked a couple of weeks ago to review a new Hayfever remedy called Prevalin. You may have heard of this new wonder non-drug, it’s making a big noise currently. Prevalin is a steroid free, natural nasal spray, It’s also non drowsy. It starts like a gel in it’s bottle. With a few vigorous shakes it turns into liquid and you spray as directed.

I have to admit it’s a bit of a strange sensation, my nose actually felt more blocked for about 30 mins after use. But the instructions do state this can happen for up to an hour as the spray turns back into a gel. Thankfully beyond this period I noticed no dramatic problems with my breathing. The spray creates a barrier inside your noise, silently blocking pollen. Any existing pollen is also diffused.

I tested this spray over several weeks and saw a dramatic improvement in my symptoms. It actually gave a feeling of freedom, I was no longer scared of walking upon freshly cut grass, or sniffing a scented flower. My eyes also stopped watering. By diffusing the pollen before it causes a problem, it never gets a chance to develop into full blown hayfever symptoms.

Without question. Finally a natural, non drowsy product that gives all day relief. It’s suitable for pregnant and breastfeeding women, children over 12 and Athletes. There’s no known side effects and it’s a complete alternative to traditional antihistamines, nose sprays, eye drops. Unlike antihistamines, Prevalin will not make you drowsy or sleepy. Unlike steroid treatment, Prevalin can be used by Athletes.

Not really, it works exactly as it’s meant to. I would say that making it available for children would be beneficial, but Prevalin has already created Prevalin Allergy for Kids for ages 6-12 so I can’t even suggest that. To put it simply, it works!