Time for a book review! If like me you have noticed the recent popularity of creatures made from socks then you might be wondering how you too can get in on the fun. I have been keen to have a go for quite sometime, but despite being fairly experienced at sewing; cutting up and reforming a pair of socks seemed quite daunting. Enter Stupid Sock Creatures by John Murphy! 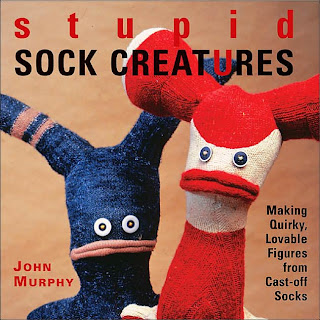 This book was very kindly sent to me by the publishers GMC Publications and I have to say I love it! For a start the author is very funny which makes the book very easy to read. He freely admits that his creatures came about because he failed at his attempts to make a sock monkey. So I chose a pair of socks and set about making a creature called Owlsley. 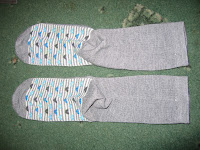 The end result? Well… he is very creature/monster like, but he isn’t such a great copy of Owlsley. 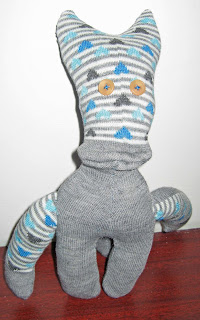 Do I consider him a failure? No, not at all. He is much adored by my daughter and I think this is rather the point the book is trying to make, that there are no hard and fast rules when it comes to creature making.

Why did he turn out looking more like a donkey than Owlsey? I think it’s probably to do with several things, firstly I was using womens socks, the author uses mens so they would be wider. Secondly I was using very very cheap socks with a huge amount of stretch so my stuffing technique may have elongated his head slightly.

Finally the pattern is more of an explanation, it doesn’t give exact measurements, so I probably didn’t cut far enough down the sock to make his head, thus he got a longer one.

Would I recommend this book? Yes I would, it’s quirky and genuinely amusing to read. It also offers something completely different from the standard fare. I think my children could probably master sock creatures, I’m fairly confident my husband could too. Infact I wonder if they would be better at it than me.

Could the book be any better? Perhaps, I did find the instructions slightly difficult to follow, but I have a feeling this is because I am used to detailed patterns and this comes more from the angle of a person with no sewing experience. The huge benefit though is that the pictures are very clear. The part I most stuggled with was the mouth, thankfully the picture helped me work it out and now I understand what the author was saying in the first place.

I think this book plus some socks, scissors and thread would make a fantastic Christmas gift (I know, I know, there’s months to go yet, but we Mums have to think ahead!) It is also currently available at Amazon for a very good price.