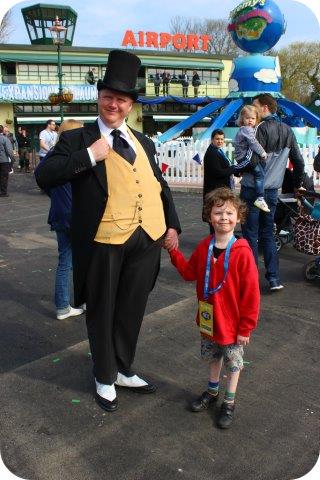 I thought we’d start today’s post with a sing-a-long. My rhyme is sung to the tune of Thomas the Tank Engine’s theme song (we’re two, we’re four, we’re six, we’re eight, counting trucks and hauling freight…) and sums up the brilliant time my family had at the opening of the Thomas Land expansion at Drayton Manor Theme Park. So here we go…

‘We’re one, we’re two, we’re three, we’re more, gone to Drayton for a tour, of the brand new Thomas Land, its got bigger and so grand! With some brand new rides to play, we had a merry lively day, Thomas makes us really glad, for the fun we had.’ 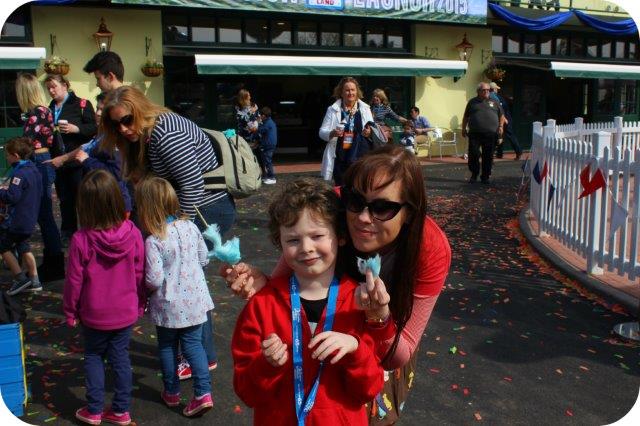 On the 8th April Bloggers and VIPs made their way to the grand opening of the Thomas Land expansion at Drayton Manor Theme Park in Staffordshire. The expansion has seen Thomas Land grow 40% in size and gain three brand new rides, an airport café, band stand and even old fashioned fairground games. 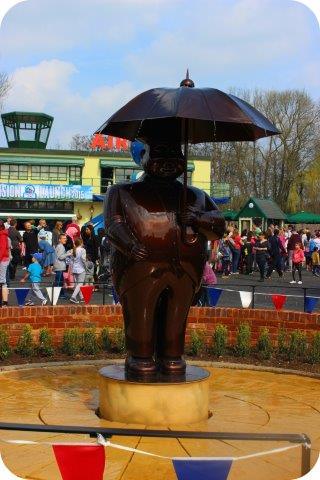 My little engine drivers were completely over excited when the day finally arrived and we stepped foot into Thomas Land. They’ve all loved the programs, books and toys and of course when you throw rides into the mix you’re guaranteed a fabulous day out. I on the other hand was rather apprehensive, the opening took place during the Easter holidays and I was imagining queues and chaos everywhere I looked. Admittedly Thomas Land got a bit crowded once it opened to the public, but chaotic it was not. All the rides were easily accessible and our longest wait was 15 minutes which as any theme park visitor will tell you is really not a long time. I was also seriously impressed with the staff. We had Granny along for the adventure and at one point she dropped a box of popcorn while holding too many things. She came to grab me to go back and help scoop it up but when we turned around it was already being swept away by a diligent member of Thomas Land’s crew, now that’s an efficient service! On to the new rides… 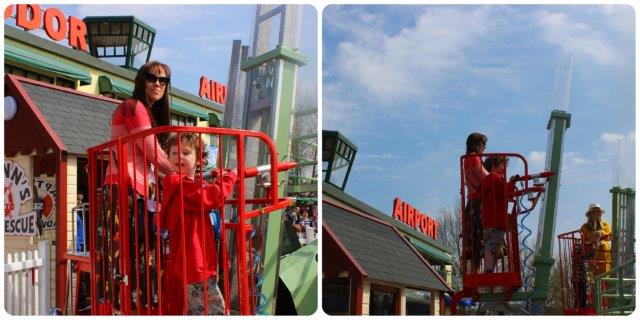 In Flynn’s new ride would-be firefighters climb aboard a fire engine and shoot water at a burning tower (no real fire though parents). The cherry picker goes up and down as you try and aim the water through holes in the tower sides. Younger firefighters can ride along in the engine below. This was by far my youngest favourite ride and we had several goes, a word of warning though you may get splashed! 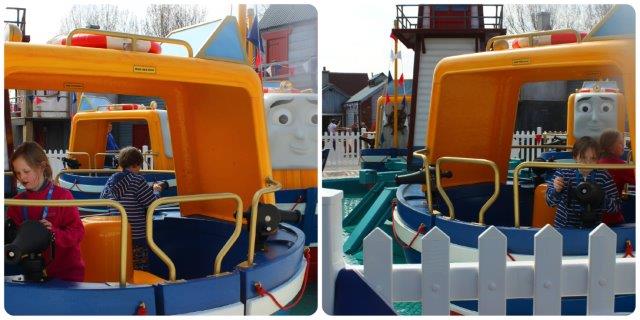 Climb aboard Captain as he twirls in circles around the centre of the ride. Crank your water cannon and try to shoot everyone in the boats nearby or even those waiting in the queue! My eldest two loved this ride and had several turns until they had perfected their watery aim. 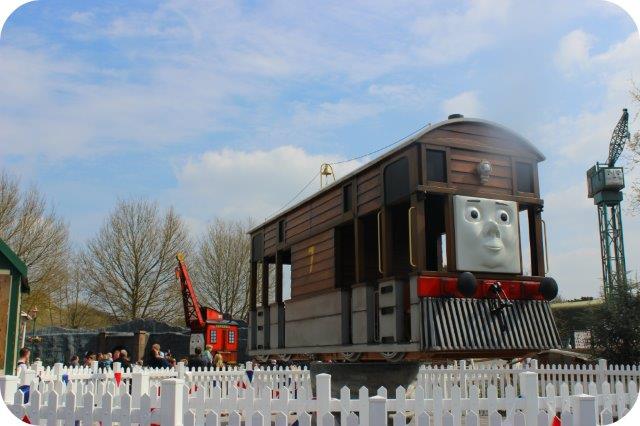 I would love to be able to give you a detailed description of Toby’s new ride but unfortunately while he was working initially, he’d had a few teething problems and we never got to have a go. From what we saw he rises into the air and swings around for a thrilling aerial adventure.

I took a few videos of all our fun and you can see a small selection here (including a talking Cockatoo!) 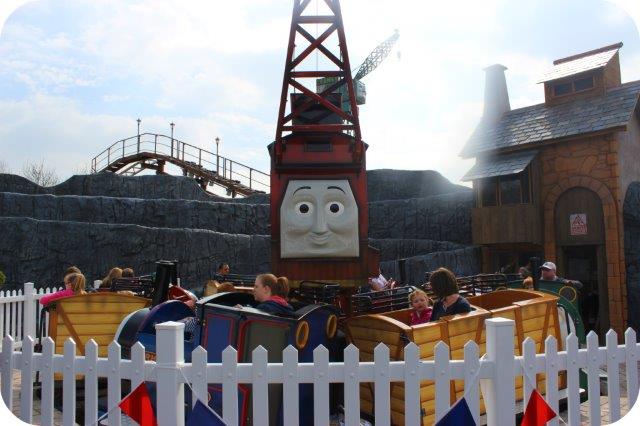 The Blue Mountain Engines now have Merrick overseeing their journey, which really brings the ride to life. 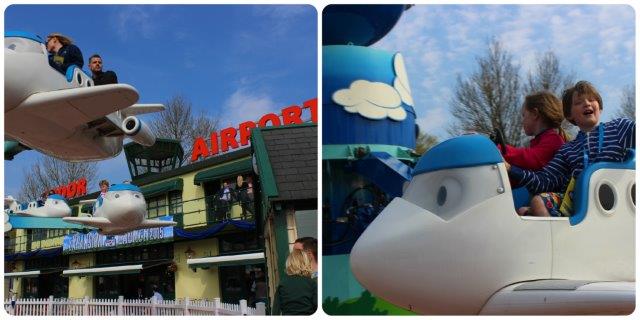 Sodor Airport sits at the heart of the expansion and offers views across the park from its balcony. A café below is a welcome respite for any weary parents and is situated right by Jeremy Jet’s Flying Academy which looks perfectly at home in its new position. Incidentally this is my daughter’s favourite ride 🙂 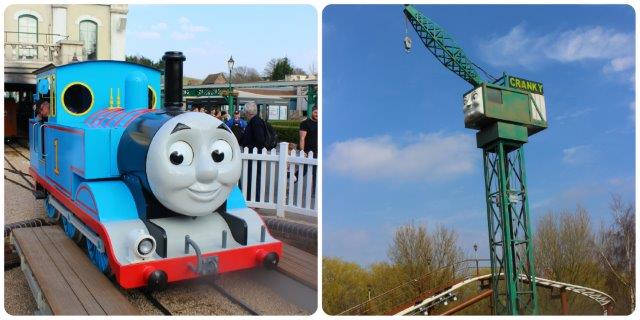 After a ride on Thomas and the Troublesome trucks overseen by Cranky the Crane, Granny and Mummy were feeling rather tired so we popped into the Thomas Soft Play Centre which is located by the large gift shop. Comfy sofas were provided for the parents while the kids had a fabulous time climbing and sliding within this brilliantly equipped play area. 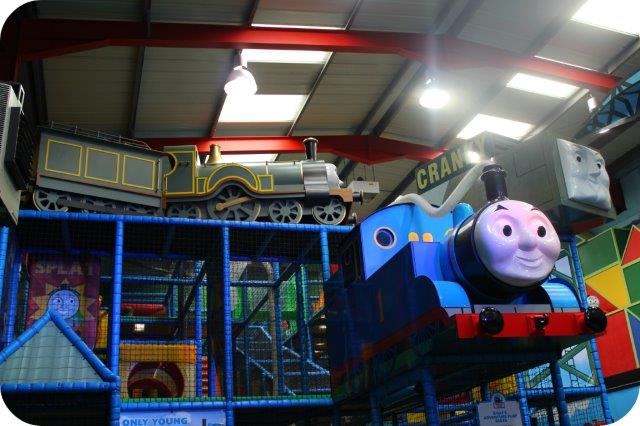 Drayton has much more to offer for the whole family but it would easily take me another post to cover even some of it. There’s a zoo, 4d cinema, rides aplenty and even a Dino World. Suffice to say another visit will have to be planned! 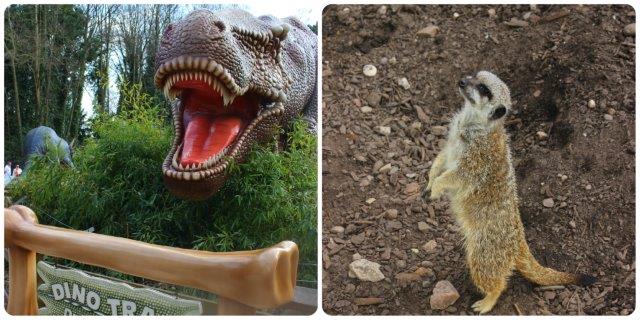 As I mentioned in my previous post, my family and I were invited along to Thomas Land at Drayton Manor. We viewed a special screening of Thomas the Tank Engine’s new movie ‘Thomas Tale of the Brave’. After the film we headed out into the park. 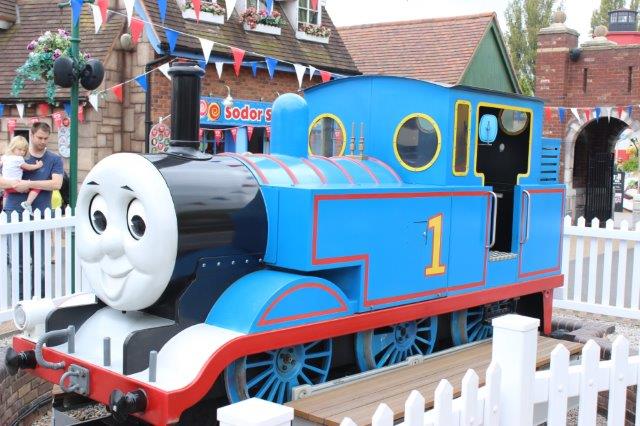 We began our day out with a ride on Thomas himself, complete with moving eyes! 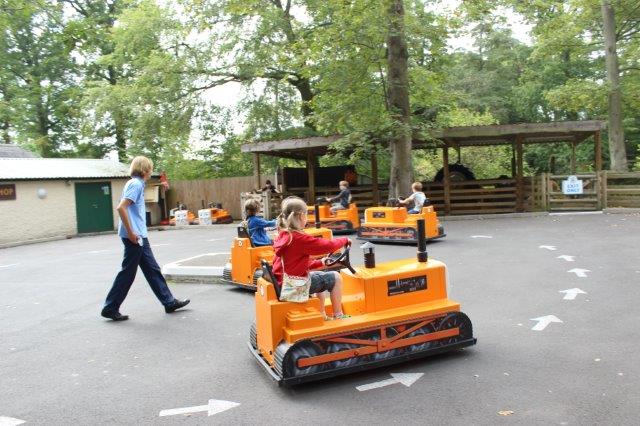 Despite the traditional age of Thomas fans the world over, the park caters for just about everyone. My youngest is shy of most rides but there was plenty of non threatening fun which didn’t scare or concern. His favourite was Terence’s Driving School where he was let loose on a moving vehicle, it’s a good job those friendly theme park assistants have quick legs! 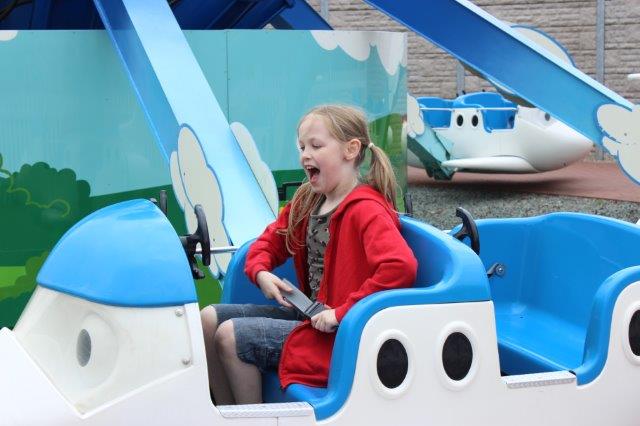 My daughter’s favourite was Jeremy’s Flying Academy where she could control the height of her plane as she spun around. 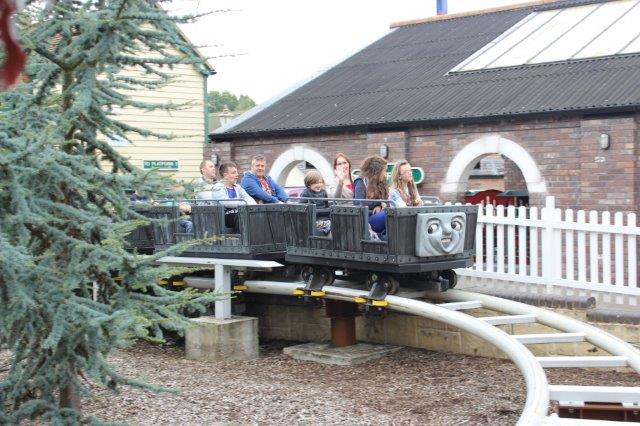 For my son (who is a thrill seeker in training) there was the family friendly Troublesome Trucks roller coaster, he squealed with glee as he sped along the rails. I on the other hand (less keen on rides) actually felt very brave that I managed to join him! 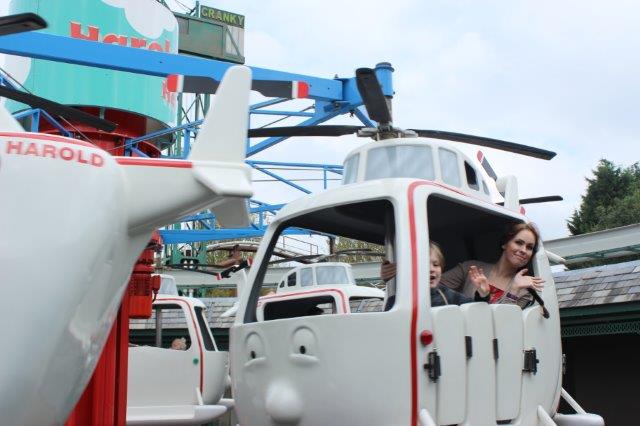 While I enjoyed every ride that I went on, the children were even more impressed with the large selection that they were allowed to ride on alone. 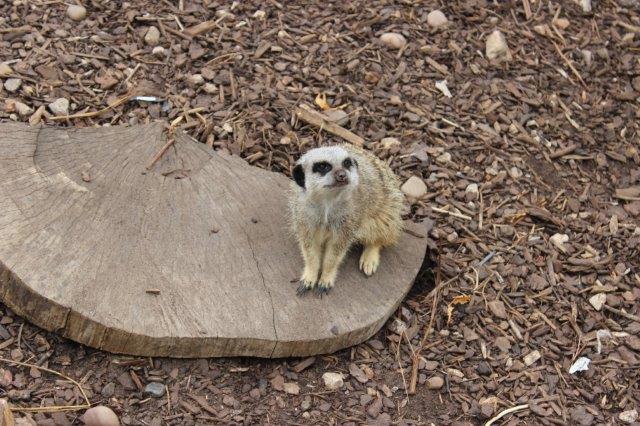 We also managed to explore the rest of Drayton Manor and were pleasantly surprised by just how much there was to see. There’s a wonderful zoo complete with Panthers, Meerkats, Monkeys and even a tiger settling in. 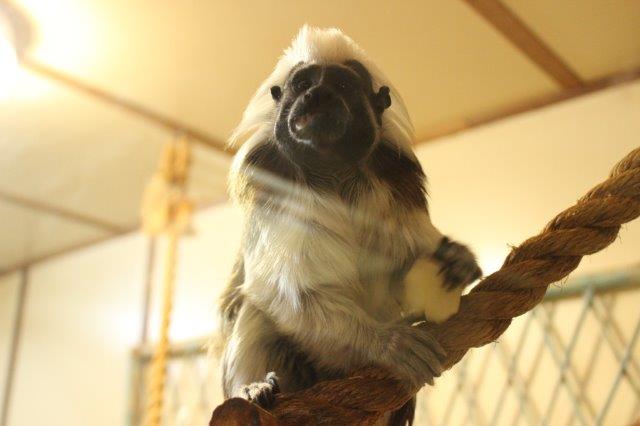 We pretended to be pirates and my kids were caught by a Great White Shark! We truly had a fabulous day and can’t wait to return to Drayton Manor soon. 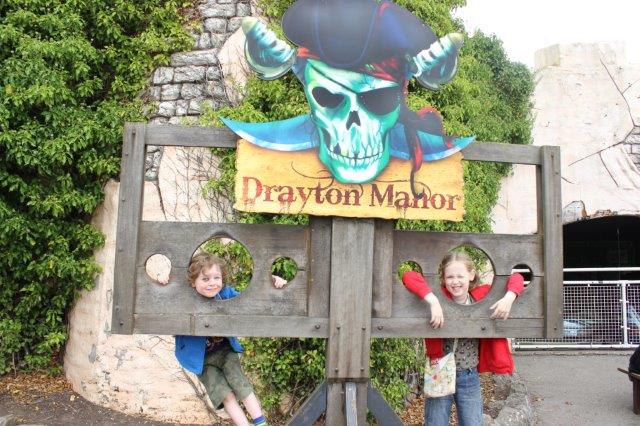 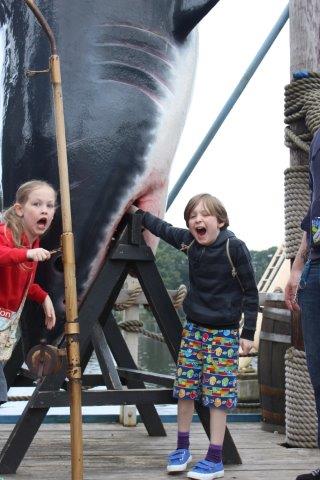 Comments Off on A Day Out – Thomas Land at Drayton Manor