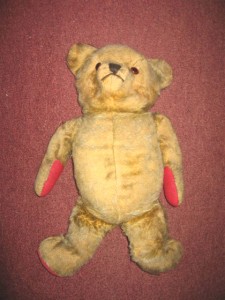 A little while ago I bought a rather unloved Teddy Bear. His mohair was matted and bald in places, his eyes were loose and he had a rather saggy appearance. He even came to me wrapped in a bin bag! As a child I collected bears (or at least as much as my pocket money would allow) and as an adult I still love them. Old bears in particular hold a significant charm for me, my parents still have my Grandpa’s bear that was in his house when it was bombed during World War II. Plus they continue to stand the test of time in terms of their enduring popularity.

It’s been a long time though since I last bought a bear, but when I came across ‘Rawdon’ (I might have been re-reading Vanity Fair at the point of naming) I had to buy him despite his less than favourable appearance. I’m not sure the photos show just how woeful he looked when he first arrived home. 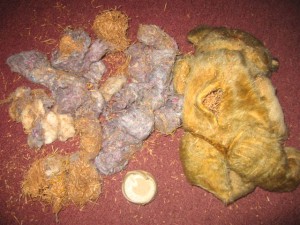 I’ve sewn bears in the past, but it’s another thing entirely to undo and remake one. After some consideration I decided to undo the back seam on Rawdon’s body. It’s the last opening to be closed when making a bear, so working backwards it seemed like a good place to start. To my surprise he was not only filled with traditional wood wool stuffing, but upholstery padding as well! I assume this is an old repair by a previous owner. Unfortunately this combination only served to make Rawdon both hard and lumpy and floppy at the same time. I extracted all the stuffing, replaced any decent wood wool and then used modern stuffing to fill in the gaps. I also found an old and broken growler inside the stomach.

Next I opened Rawdon’s head (sounds awfully mean really) and the same combination of strange stuffing products fell out. I reattached his glass eyes and restuffed him carefully. I repeated the same process on each of his limbs.

I then cleaned up his mohair as much as I could. The photos don’t really show it, but he’s changed quite a bit in colour. Finally I tentatively removed his red paw coverings and was delighted to find his original pads still intact underneath. 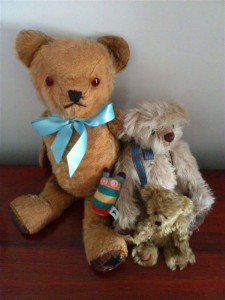 With a brand new bow and some new friends, I think Rawdon now looks rather dapper sat upon the chest of drawers. He’s also grown two inches in height!